View source
watch 01:36
We're Getting Mutants in the MCU - The Loop
Do you like this video?
Play Sound

Baker Terry
The Duck Guy, or simply Duck, is one of the three protagonists of the Don't Hug Me I'm Scared web series, along with Red Guy and Yellow Guy. He tends to theorize about the topics presented to him and his friends as well as question them, and likes eating chicken and eggs (although being a bird himself) with his friends.

He is a dark green mallard duck wearing a brown tweed jacket, and speaks with an auto-tuned voice.

He is also sometimes referred to as Bird, Bird Guy, or Green. Some fans call him Robin, but this is not his official name.

In DHMIS 1, he is one of the students of the Sketchbook and chooses red as his favorite color.

In DHMIS 2, when he starts to question the existence of time philosophically, Tony the Talking Clock cuts him off.

In DHMIS 3, Duck is having a picnic of chicken and boiled eggs with his friends, Yellow Guy and Red Guy. Yellow Guy leaves and soon after Duck and Red find him and reveal that they have saved the last egg for him.

In DHMIS 5, he eventually has enough of the teachers, but then the Giant Can eats his internal organs, killing him.

In DHMIS 6, when Red Guy fiddles with the Machine, Duck Guy from DHMIS 2 appears, before almost immediately questioning where he is. Seconds later he is replaced by Space Guy. Later, when the world was reverted by Red Guy, he appeared again in a world with freedom.

After the Duck Guy answers the mysterious ringing phone, he wakes up strapped to a table while the Giant Can had disemboweled him and is now eating his organs and stuffing himself inside his own body. His remains are later fed to Yellow Guy after being forced and pressured by the rest of the food gang. 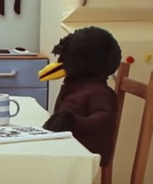 The first we ever see of Duck Guy 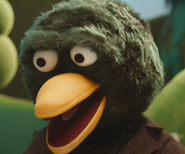 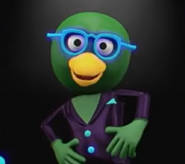