Gilbert the Globe is the canon name of the globe character from Don't Hug Me I'm Scared 4.

In Don't Hug Me I'm Scared 4, Gilbert made his first and only appearance. First, when The Computer interrupted him. He later made it into the digital world since he appears in the background. 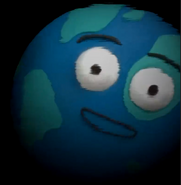 Gilbert at digital world
Add a photo to this gallery
Retrieved from "https://dhmis.fandom.com/wiki/Gilbert_The_Globe?oldid=19488"
Community content is available under CC-BY-SA unless otherwise noted.