Space Guy was a teacher from Don't Hug Me, I'm Scared 6. His appearance was very brief, and he supposedly only exists as an example of one of the many teachers the machine can create, or future lessons that we had yet to see.

He appear's singing his lyrics right before it switches to the Football. 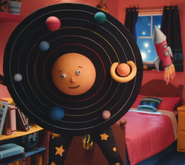