Lyrics (of the song)

(The scene changes to the room of a psychologist, the Young Man is in a chair, explaining his problem.)

Young Man: ...It was very embarrasing,

Young Man: i think it really affected me...

(Young Man get ups of the chair and looks at the psychologist.)

(The pshychologist looks at the Young Man.)

Chef: Remember to mix all the ingredients thoroughly, don't just sit around wasting your time.

Young Man: Well, what have you ever done with your life?!!

(The chef shows a blancmange.)

Chef: I made this blancmange.

(The scene changes to what seems to be a forest or a farm, Young Man is painting a horse.)

(The second vandal paints a graffiti saying ¡FUNK!, which seems to be unrelated to the situation.)

(Also, there's a calendar indicating that June 19 is probably the Young Man's birthday.) 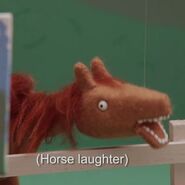 Vandal 2 with his FUNK! graffiti.

Comparition of Young Man and Roy
Community content is available under CC-BY-SA unless otherwise noted.
Advertisement